Skin cancer is a malignant growth on the skin which can have many causes. The three most common skin cancers are basal cell cancer, squamous cell cancer, and melanoma, each of which is named after the type of skin cell from which it arises. Skin cancer generally develops in the epidermis (the outermost layer of skin), so a tumor is usually clearly visible. This makes most skin cancers detectable in the early stages. Unlike many other cancers, including those originating in the lung, pancreas, and stomach, only a small minority of those afflicted will actually die of the disease. Skin cancer represents the most commonly diagnosed cancer, surpassing lung, breasts, colorectal and prostate cancer. Melanoma is less common than basal cell carcinoma and squamous cell carcinoma, but it is the most serious—for example, in the UK there are 9,500 new cases of melanoma each year, and 2,300 deaths. It is the most common cancer in the young population (20 – 39 age group). It is estimated that approximately 85% of cases are caused by long periods of exposure to the sun. Non-melanoma skin cancers are the most common skin cancers, and the majority of these are basal cell carcinomas. These are usually localized growths caused by excessive cumulative exposure to the sun and do not tend to spread.

The three most common types of skin cancers are:

Basal cell carcinomas (BCC) is the most common.They are present on sun-exposed areas of the skin, especially the face. They rarely metastasize, and rarely cause death. They are easily treated with surgery or radiation. Squamous cell carcinomas (SCC) are common, but much less common than basal cell cancers. They metastasize more frequently than BCCs. Even then, the metastasis rate is quite low, with the exception of SCCs of the lip, ear, and in immunosuppressed patients. Melanomas are the least frequent of the 3 common skin cancers. They frequently metastasize, and are deadly once spread.

The BCC and the SCC often carry a UV-signature mutation indicating that these cancers are caused by UV-B radiation via the direct DNA damage. However the malignant melanoma is predominantly caused by UV-A radiation via the indirect DNA damage. The indirect DNA damage is caused by free radicals and reactive oxygen species. Research indicates that the absorption of three sunscreen ingredients into the skin, combined with a 60-minute exposure to UV, leads to an increase of free radicals in the skin, if applied in too little quantities and too infrequently. However, the researchers add that newer creams often do not contain these specific compounds, and that the combination of other ingredients tends to retain the compounds on the surface of the skin. They also add the frequent re-application reduces the risk of radical formation.

Skin cancer as a group

Even though it is much less common than BCCs and SCCs, malignant melanoma is responsible for 75% of all skin cancer-related deaths. While sunscreen has been shown to protect against BCC and SCC it may not protect against malignant melanoma. When sunscreen penetrates into the skin it generates reactive chemicals. It has been found that sunscreen use is correlated with malignant melanoma. The lab-experiments and the epidemiological studies suggests that sunscreen use correlates with melanoma incidence. The question that has to be asked is: “Are sunscreen users also the ones with the highest lifetime exposure to ultraviolet lights?” or are sun screens tumor promoters or carcinogens themselves. Logic might suggest that sunscreen users also are the ones most likely to be burned or have been burned by sun light. If it is true that some suncreen induces the formation of skin cancers, the physical sunscreen which are metallic in nature (zinc and titanium) are likely safer and likely to be inert. In the past, most sunscreens were chemical blockers (benzones, etc.).

There are a variety of different skin cancer symptoms. These include changes in the skin that do not heal, ulcering in the skin, discolored skin, and changes in existing moles, such as jagged edges to the mole and enlargement of the mole.

Skin cancer has many potential causes, these include:

Although it is impossible to completely eliminate the possibility of skin cancer, the risk of developing such a cancer can be reduced significantly with the following steps:

Australian scientist Ian Frazer who developed a vaccine for cervical cancer, says that a vaccine effective in preventing for certain types of skin cancer has proven effective on animals and could be available within a decade. The vaccine would only be effective against Squamous Cell Carcinoma. 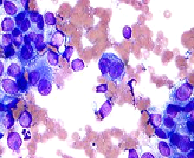 Macroscopically, the tumor is often elevated, fungating, or may be ulcerated with irregular borders. Microscopically, tumor cells destroy the basement membrane and form sheets or compact masses which invade the subjacent connective tissue (dermis). In well differentiated carcinomas, tumor cells are pleomorphic/atypical, but resembling normal keratinocytes from prickle layer (large, polygonal, with abundant eosinophilic (pink) cytoplasm and central nucleus). Their disposal tends to be similar to that of normal epidermis: immature/basal cells at the periphery, becoming more mature to the centre of the tumor masses. Tumor cells transform into keratinized squamous cells and form round nodules with concentric, laminated layers, called “cell nests” or “epithelial/keratinous pearls”. The surrounding stroma is reduced and contains inflammatory infiltrate (lymphocytes). Poorly differentiated squamous carcinomas contain more pleomorphic cells and no keratinization.

For low-risk disease, radiation therapy (external beam radiotherapy or brachytherapy), topical chemotherapy (imiquimod or 5-fluorouracil) and cryotherapy (freezing the cancer off) can provide adequate control of the disease; both, however, may have lower overall cure rates than certain type of surgery. Other modalities of treatment such as photodynamic therapy, topical chemotherapy, electrodessication and curettage can be found in the discussions of basal cell carcinoma and squamous cell carcinoma.

Mohs’ micrographic surgery (mohs surgery) is a technique used to remove the cancer with the least amount of surrounding tissue and the edges are checked immediately to see if tumor is found. This provides the opportunity to remove the least amount of tissue and provide the best cosmetically favorable results. This is especially important for areas where excess skin is limited, such as the face. Cure rates are equivalent to wide excision. Special training is required to perform this technique.

In the case of disease that has spread (metastasized), further surgical procedures or chemotherapy may be required.

Scientists have recently been conducting experiments on what they have termed “immune- priming”. This therapy is still in its infancy but has been shown to effectively attack foreign threats like viruses and also latch onto and attack skin cancers. More recently researchers have focused their efforts on strengthening the body’s own naturally produced “helper T cells” that identify and lock onto cancer cells and help guide the killer cells to the cancer. Researchers infused patients with roughly 5 billion of the helper T cells without any harsh drugs or chemotherapy. This type of treatment if shown to be effective has no side effects and could change the way cancer patients are treated.

Currently, surgical excision is the most common form of treatment for skin cancers. The goal of reconstructive surgery is restoration of normal appearance and function. The choice of technique in reconstruction is dictated by the size and location of the defect. Excision and reconstruction of facial skin cancers is generally more challenging due to presence of highly visible and functional anatomic structures in the face.

When skin defects are small in size, most can be repaired with simple repair where skin edges are approximated and closed with sutures. This will result in a linear scar. If the repair is made along a natural skin fold or wrinkle line, the scar will be hardly visible. Larger defects may require repair with a skin graft, local skin flap, pedicled skin flap, or a microvascular free flap. Skin grafts and local skin flaps are by far more common than the other listed choices.

Local skin flaps are a method of closing defects with tissue that closely matches the defect in color and quality. Skin from the periphery of the defect site is mobilized and repositioned to fill the deficit. Various forms of local flaps can be designed to minimize disruption to surrounding tissues and maximize cosmetic outcome of the reconstruction. Pedicled skin flaps are a method of transferring skin with an intact blood supply from a nearby region of the body. An example of such reconstruction is a pedicled forehead flap for repair of a large nasal skin defect. Once the flap develops a source of blood supply form its new bed, the vascular pedicle can be detached.