Testicular cancer is cancer that develops in the testicles, a part of the male reproductive system.

In the United States, between 7,500 and 8,000 diagnoses of testicular cancer are made each year. Over his lifetime, a man’s risk of testicular cancer is roughly 1 in 250 (0.4%). It is most common among males aged 15–40 years, particularly those in their mid-twenties. Testicular cancer has one of the highest cure rates of all cancers: in excess of 90 percent; essentially 100 percent if it has not metastasized. Even for the relatively few cases in which malignant cancer has spread widely, chemotherapy offers a cure rate of at least 85 percent today. Not all lumps on the testicles are tumors, and not all tumors are malignant; there are many other conditions such as testicular microlithiasis, epididymal cysts, appendix testis (hydatid of Morgagni), and so on which may be painful but are non-cancerous.

Testicular cancer is most common among caucasian men and rare among men of African descent. Testicular cancer is uncommon in Asia and Africa. Worldwide incidence has doubled since the 1960s, with the highest rates of prevalence in Scandinavia, Germany, and New Zealand.

Incidence among African Americans doubled from 1988 to 2001 with a bias towards seminoma. The lack of significant increase in the incidence of early-stage testicular cancer during this timeframe suggests that the overall increase was not due to heightened awareness of the disease.

Although testicular cancer is most common among men aged 15–40 years, it has three peaks: infancy through the age of four as teratomas and yolk sac tumors, ages 25–40 years as post-pubertal seminomas and nonseminomas, and from age 60 as spermatocytic seminomas.

Germ cell tumors of the testis are the most common cancer in young men between the ages of 15 and 35 years.

A testicular mass can often be palpated. Because testicular cancer is curable when detected early (stage one can have a success rate of >98%), experts recommend regular monthly testicular self-examination after a hot shower or bath, when the scrotum is looser. Men should examine each testicle, feeling for pea-shaped lumps. The testicle should normally feel smooth to the touch. Ridges may be felt because of enlarged blood vessels or tumor growth. Additionally the entire testicle may feel hard and bumpy to the touch.The U.S. Preventive Services Task Force (USPSTF) recommends against routine screening for testicular cancer in asymptomatic adolescent and adult.

Symptoms may include one or more of the following:

The nature of any palpated lump in the scrotum is evaluated by scrotal ultrasound, which can determine exact location, size, and some characteristics of the lump, such as cystic vs solid, uniform vs heterogeneous, sharply circumscribed or poorly defined. The extent of the disease is evaluated by CT scans, which are used to locate metastases. Blood tests are also used to identify and measure tumor markers that are specific to testicular cancer. AFP alpha1 feto protein, Beta-HCG, and LDH are the typical markers used to identify testicular cancer. The diagnosis is made by performing an inguinal orchiectomy, surgical excision of the entire testis along with attached structures epididymis and spermatic cord; the resected specimen is evaluated by a pathologist. A biopsy should not be performed, as it raises the risk of migrating cancer cells into the scrotum. The reason why inguinal orchiectomy is the preferred method is that the lymphatic system of the scrotum links to the lower extremities and that of the testicle links to the retroperitoneum. A transscrotal biopsy or orchiectomy will potentially leave cancer cells in the scrotum and create two vectors for cancer spread, while in an inguinal orchiectomy only the retroperitoneal route exists. 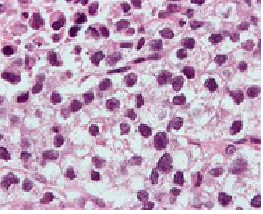 The cardinal diagnostic finding in the patient with testis cancer is a mass in the substance of the testis. Unilateral enlargement of the testis with or without pain in the adolescent or young adult male should raise concern for testis cancer.

The differential diagnosis of testicular cancer requires examining the histology of tissue obtained from an inguinal orchiectomy specimen. Orchiectomy, rather than transcrotal biopsy, is preferred to reduce the risk of spill and thus the risk of metastasis, in the event that the tumor is malignant. For orchiectomy, an inguinal surgical approach is preferred.

Before 1970, the young man with recurrent testicular cancer was destined to have rapid progression and death from disseminated disease. Currently, although 7000 to 8000 new cases of testicular cancer occur in the United States yearly, only 400 men are expected to die of the disease. Much of this improvement is due to advances in adjuvant therapy.

Due to the risk of subsequent metastasis, post-surgical adjuvant therapy may be offered to the patient following orchiectomy. The type of adjuvant therapy depends largely on the histology of the tumor and the stage of progression at the time of surgery. These two factors contribute to the risk of recurrence, including metastasis. Adjuvant treatments may involve chemotherapy, radiotherapy or careful surveillance by frequent CT scans and blood tests by oncologists.

Although testicular cancer can be derived from any cell type found in the testicles, more than 95% of testicular cancers are germ cell tumors. Most of the remaining 5% are sex cord-gonadal stromal tumours derived from Leydig cells or Sertoli cells. Correct diagnosis is necessary to ensure the most effective and least harmful treatment. To some extent, this can be done via blood tests for tumor markers, but definitive diagnosis requires examination of the histology of a specimen by a pathologist.

Most pathologists use the World Health Organization Classification system for testicular tumours:

Mesenchymal tumours of the spermatic cord and testicular adnexae

Secondary tumours of the testis

In broad terms, testicular cancer is staged as follows:

While it may be possible, in some cases, to remove testicular cancer tumors from a testis while leaving the testis functional, this is almost never done, as the affected testicle usually contains pre-cancerous cells spread throughout the entire testicle. Thus removing the tumor alone without additional treatment greatly increases the risk that another cancer will form in that testicle . Since only one testis is typically required to maintain fertility, hormone production, and other male functions, the afflicted testis is almost always removed completely in a procedure called inguinal orchiectomy. (The testicle is almost never removed through the scrotum; an incision is made beneath the belt line in the inguinal area.) Most notably, since removing the tumor alone does not eliminate the precancerous cells that exist in the testis, it is usually better in the long run to remove the entire testis to prevent another tumor. A plausible exception could be in the case of the second testis later developing cancer as well. In the UK, the procedure is known as a Radical Orchidectomy.

In the case of nonseminomas that appear to be stage I, surgery may be done on the retroperitoneal/Paraaortic lymph nodes (in a separate operation) to accurately determine whether the cancer is in stage I or stage II and to reduce the risk that malignant testicular cancer cells that may have metastasized to lymph nodes in the lower abdomen. This surgery is called Retroperitoneal Lymph Node Dissection (RPLND). However, this approach, while standard in many places, especially the United States, is out of favor due to costs and the high level of expertise required to perform the surgery. The urologist may take extra care in the case of males who have not fathered children, to preserve the nerves involved in ejaculation.

Many patients are instead choosing surveillance, where no further surgery is performed unless tests indicate that the cancer has returned. This approach maintains a high cure rate because of the growing accuracy of surveillance techniques.

Lymph node surgery may also be performed after chemotherapy to remove masses left behind, particularly in the cases of advanced initial cancer or large nonseminomas.

Radiation may be used to treat stage II seminoma cancers, or as adjuvant (preventative) therapy in the case of stage I seminomas, to minimize the likelihood that tiny, non-detectable tumors exist and will spread (in the inguinal and para-aortic lymph nodes). Radiation is never used as a primary therapy for nonseminoma.

As an adjuvant treatment, use of chemotherapy as an alternative to radiation therapy in the treatment of seminoma is increasing, becauseradiation therapy appears to have more significant long-term side effects (for example, internal scarring, increased risks of secondary malignancies, etc.). Two doses, or occasionally a single dose of carboplatin, typically delivered three weeks apart, is proving to be a successful adjuvant treatment, with recurrence rates in the same ranges as those of radiotherapy. However, very long term data on the efficacy of adjuvant carboplatin in this setting does not exist. Since seminoma can recur decades after the primary tumor is removed, patients receiving adjuvant chemotherapy should remain vigilant and not assume they are cured 5 years after treatment.

Chemotherapy is the standard treatment for non-seminoma when the cancer has spread to other parts of the body (that is, stage IIb or III). The standard chemotherapy protocol is three, or sometimes four, rounds of Bleomycin-Etoposide-Cisplatin (BEP). This treatment was developed by Dr. Lawrence Einhorn at Indiana University.[13] An alternative, equally effective treatment involves the use of four cycles of Etoposide-Cisplatin (EP).

While treatment success depends on the stage, the average survival rate after five years is around 95%, and stage I cancers cases (if monitored properly) have essentially a 100% survival rate (which is why prompt action, when testicular cancer is a possibility, is extremely important).

For stage I cancers that have not had any adjuvant (preventative) therapy, close monitoring for at least a year is important, and should include blood tests (in cases of nonseminomas) and CT-scans (in all cases), to ascertain whether the cancer has metastasized (spread to other parts of the body). For other stages, and for those cases in which radiation therapy or chemotherapy was administered, the extent of monitoring (tests) will vary on the basis of the circumstances, but normally should be done for five years (with decreasing intensity). For the first year blood tests for tumor markers should be done monthly, and decreasing to once every three months in the years after. CT scans should be performed once every three months in the first year and decreasing to once every six months thereafter. The high cost of CT scans and the relative danger of the radiation involved both being factors in the relative infrequence with which tests are performed. CT-scans are performed on the abdomen (and sometimes the pelvis) whereas chest x-rays are preferred for the lungs as they give sufficient detail combined with a lower false-positive rate and significantly smaller radiation dose.

A man with one remaining testis can lead a normal life, because the remaining testis takes up the burden of testosterone production and will generally have adequate fertility. However, it is worth the (minor) expense of measuring hormone levels before removal of a testicle, and sperm banking may be appropriate for younger men who still plan to have children, since fertility may be lessened by removal of one testicle[citation needed], and can be severely affected if extensive chemotherapy and/or radiotherapy is done.

Less than five percent of those who have testicular cancer will have it again in the remaining testis. A man who loses both testicles will normally have to take hormone supplements (in particular, testosterone, which is created in the testicles), and will be infertile, but can lead an otherwise normal life.

Most testicular germ cell tumors have too many chromosomes, and most often they are triploid to tetraploid. An isochromosome 12p (the short arm of chromosome 12 on both sides of the same centromere) is present in about 80 % of the testicular cancers, and also the other cancers usually have extra material from this chromosome arm through other mechanisms of genomic amplification.