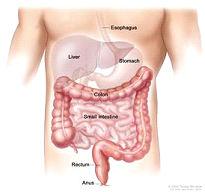 Anatomy of the lower digestive system, showing the colon and other organs.

Age and family history can affect the risk of developing rectal cancer.

Having a personal history of any of the following:

Possible signs of rectal cancer include a change in bowel habits or blood in the stool.

These and other symptoms may be caused by rectal cancer. Other conditions may cause the same symptoms. A doctor should be consulted if any of the following problems occur:

A change in bowel habits.

Stools that are narrower or have a different shape than usual.

Tests that examine the rectum and colon are used to detect (find) and diagnose rectal cancer.

Tests used to diagnose rectal cancer include the following: 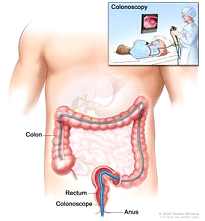 Colonoscopy. A thin, lighted tube is inserted through the anus and rectum and into the colon to look for abnormal areas.

The following tests may be used:

After rectal cancer has been diagnosed, tests are done to find out if cancer cells have spread within the rectum or to other parts of the body.

The process used to find out whether cancer has spread within the rectum or to other parts of the body is called staging. The information gathered from the staging process determines the stage of the disease. It is important to know the stage in order to plan treatment. The following tests and procedures may be used in the staging process:

When cancer cells break away from the primary (original) tumor and travel through the lymph or blood to other places in the body, another (secondary) tumor may form. This process is called metastasis. The secondary (metastatic) tumor is the same type of cancer as the primary tumor. For example, if breast cancer spreads to the bones, the cancer cells in the bones are actually breast cancer cells. The disease is metastatic breast cancer, not bone cancer.
The following stages are used for rectal cancer: 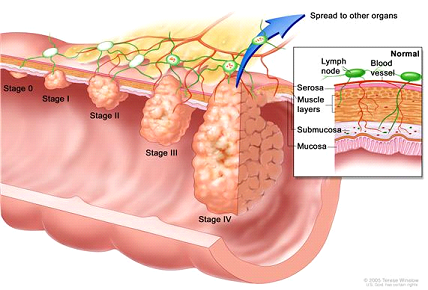 As rectal cancer progresses from Stage 0 to Stage IV, the cancer cells grow through the layers of the rectum wall and spread to lymph nodes and other organs.

There are different types of treatment for patients with rectal cancer.

Surgery is the most common treatment for all stages of rectal cancer. The cancer is removed using one of the following types of surgery:

After the cancer is removed, the surgeon will either:

Rectal cancer surgery with anastomosis. The rectum and part of the colon are removed, and then the colon and anus are joined.

Radiation therapy or chemotherapy may be given before surgery to shrink the tumor, make it easier to remove the cancer, and lessen problems with bowel control after surgery. Treatment given before surgery is called neoadjuvant therapy. Even if all the cancer that can be seen at the time of the operation is removed, some patients may be given radiation therapy or chemotherapy after surgery to kill any cancer cells that are left. Treatment given after the surgery, to lower the risk that the cancer will come back, is called adjuvant therapy.

Treatment of stage I rectal cancer may include the following:

Treatment of stage III rectal cancer may include the following:

Treatment of stage IV and recurrent rectal cancer may include the following:

Treatment for areas of cancer that have spread to the liver includes the following:

0)  Treatment for areas of cancer that has spread to the lung or ovaries is surgery.