Adult primary liver cancer is a disease in which malignant (cancer) cells form in the tissues of the liver.

The liver is one of the largest organs in the body. It has four lobes and fills the upper right side of the abdomen inside the rib cage. The liver has many important functions, 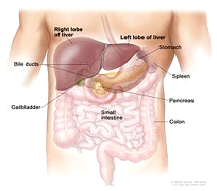 Having hepatitis or cirrhosis can affect the risk of developing adult primary liver cancer.

Possible signs of adult primary liver cancer include a lump or pain on the right side.

A doctor should be consulted if any of the following problems occur:

Tests that examine the liver and the blood are used ....?

Tests that examine the liver and the blood are used to detect (find) and diagnose adult primary liver cancer.

The following tests and procedures may be used:

A procedure in which a sample of blood is drawn and checked for the following:

Laparoscopy: A surgical procedure to look at the organs inside the abdomen to check for signs of disease. Small incisions (cuts) are made in the wall of the abdomen and a laparoscope (a thin, lighted tube) is inserted into one of the incisions. Other instruments may be inserted through the same or other incisions to perform procedures such as removing organs or taking tissue samples for biopsy.

Biopsy: The removal of cells or tissues so they can be viewed under a microscope by a pathologist to check for signs of cancer. The sample may be taken using a thin needle inserted into the liver during an x-ray or ultrasound. This is called a fine-needle aspiration (FNA) biopsy. The biopsy may be done during a laparoscopy.

CT scan (CAT scan): A procedure that makes a series of detailed pictures of areas inside the body, taken from different angles. The pictures are made by a computer linked to an x-ray machine. A dye may be injected into a vein or swallowed to help the organs or tissues show up more clearly. This procedure is also called computed tomography, computerized tomography, or computerized axial tomography.

Ultrasound exam: A procedure in which high-energy sound waves (ultrasound) are bounced off internal tissues or organs and make echoes. The echoes form a picture of body tissues called a sonogram. The picture can be printed to be looked at later.

The following stages are used for adult primary liver cancer:

In stage I, there is one tumor and it has not spread to nearby blood vessels.

In stage II, one of the following is found:

Stage III is divided into Stage IIIA, IIIB, and IIIC.

In stage IIIA, one of the following is found:

0) In stage IIIB, there are one or more tumors of any size that have either:

0) In stage IIIC, the cancer has spread to nearby lymph nodes.

In stage IV, cancer has spread beyond the liver to other places in the body, such as the bones or lungs. The tumors may be of any size and may also have spread to nearby blood vessels and/or lymph nodes.

For adult primary liver cancer, stages are also grouped according to how the cancer may be treated. There are 3 treatment groups:

The cancer is found in the liver only, has not spread, and can be completely removed by surgery.
Localized and locally advanced unresectable

The cancer is found in the liver only and has not spread, but cannot be completely removed by surgery.

Advanced
Cancer has spread throughout the liver or has spread to other parts of the body, such as the lungs and bone.

Recurrent adult primary liver cancer is cancer that has recurred (come back) after it has been treated. The cancer may come back in the liver or in other parts of the body.

Surgery
The following types of surgery may be used to treat liver cancer:

Radiation therapy is a cancer treatment that uses high-energy x-rays or other types of radiation to kill cancer cells or keep them from growing.

Radiation therapy is given in different ways:

The way the radiation therapy is given depends on the type and stage of the cancer being treated.

Regional chemotherapy is usually used to treat liver cancer. A small pump containing anticancer drugs may be placed in the body. The pump puts the drugs directly into the blood vessels that go to the tumor.

Another type of regional chemotherapy is chemoembolization of the hepatic artery. The anticancer drug is injected into the hepatic artery through a catheter (thin tube). The drug is mixed with a substance that blocks the artery, cutting off blood flow to the tumor. Most of the anticancer drug is trapped near the tumor and only a small amount of the drug reaches other parts of the body. The blockage may be temporary or permanent, depending on the substance used to block the artery. The tumor is prevented from getting the oxygen and nutrients it needs to grow. The liver continues to receive blood from the hepatic portal vein, which carries blood from the stomach and intestine.

The way the chemotherapy is given depends on the type and stage of the cancer being treated.

Percutaneous ethanol injection
Percutaneous ethanol injection is a cancer treatment in which a small needle is used to inject ethanol (alcohol) directly into a tumor to kill cancer cells. The procedure may be done once or twice a week. Usually local anesthesia is used, but if the patient has many tumors in the liver, general anesthesia may be needed.
Hyperthermia therapy

Treatment of localized and locally advanced unresectable adult primary liver cancer may include the following: