Bladder cancer refers to any of several types of malignant growths of the urinary bladder. It is a disease in which abnormal cells multiply without control in the bladder. The bladder is a hollow, muscular organ that stores urine; it is located in the pelvis. The most common type of bladder cancer begins in cells lining the inside of the bladder and is called transitional cell carcinoma (sometimes urothelial cell carcinoma). 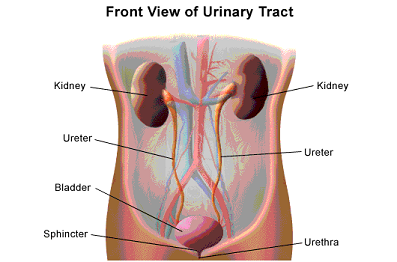 Bladder cancer characteristically causes blood in the urine; this may be visible to the naked eye (frank hematuria) or detectable only by microscope (microscopic hematuria). Other possible symptoms include pain during urination, frequent urination (Polyuria) or feeling the need to urinate without results. These signs and symptoms are not specific to bladder cancer, and are also caused by non-cancerous conditions, including prostate infections and cystitis. Kidney cancer also can cause hematuria.

Tobacco smoking is the main known cause of urinary bladder cancer: in most populations, smoking causes over half of bladder cancer cases in men and a sizeable proportion in women. There is a linear relationship between smoking and risk, and quitting smoking reduces the risk. In a 10-year study involving almost 48,000 men, researchers found that men who drank 1.5L of water a day had a significantly reduced incidence of bladder cancer when compared with men who drank less than 240mL (around 1 cup) per day. The authors proposed that bladder cancer might partly be caused by the bladder directly contacting carcinogens that are excreted in urine. Thirty percent of bladder tumors probably result from occupational exposure in the workplace to carcinogens such as benzidine. 2-Naphthylamine, which is found in cigarette smoke, has also been shown to increase bladder cancer risk. Occupations at risk are metal industry workers, rubber industry workers, workers in the textile industry, and people who work in printing. Some studies also suggest that auto mechanics have an elevated risk of bladder cancer due to their frequent exposure to hydrocarbons and petroleum-based chemicals. Hairdressers are thought to be at risk as well because of their frequent exposure to permanent hair dyes.

The gold standard for diagnosing bladder cancer is biopsy obtained during cystoscopy. Sometimes it is an incidental finding during cystoscopy. Urine cytology can be obtained in voided urine or at the time of the cystoscopy (“bladder washing”). Cytology is very specific (a positive result is highly indicative of bladder cancer) but suffers from low sensitivity (a negative result does not exclude the diagnosis of cancer). There are newer urine bound markers for the diagnosis of bladder cancer. These markers are more sensitive but not as specific as urine cytology. They are much more expensive as well. Many patients with a history, signs, and symptoms suspicious for bladder cancer are referred to a urologist or other physician trained in cystoscopy, a procedure in which a flexible tube bearing a camera and various instruments is introduced into the bladder through the urethra. Suspicious lesions may be biopsied and sent for pathologic analysis.

The following stages are used to classify the location, size, and spread of the cancer, according to the TNM (tumor, lymph node, and metastasis) staging system:

Stage 0: Cancer cells are found only on the inner lining of the bladder.

Stage II: Cancer cells have proliferated to the muscles in the bladder wall but not to the fatty tissue that surrounds the urinary bladder.

Stage III: Cancer cells have proliferated to the fatty tissue surrounding the urinary bladder and to the prostate gland, vagina, or uterus, but not to the lymph nodes or other organs.

Stage IV: Cancer cells have proliferated to the lymph nodes, pelvic or abdominal wall, and/or other organs.

Recurrent: Cancer has recurred in the urinary bladder or in another nearby organ after having been treated.
Bladder TCC is staged according to the 1997 TNM system:

One of the following types of surgery may be done:

Transurethral resection (TUR) with fulguration: Surgery in which a cystoscope (a thin lighted tube) is inserted into the bladder through the urethra. A tool with a small wire loop on the end is then used to remove the cancer or to burn the tumor away with high-energy electricity. This is known as fulguration.

Surgery to remove the bladder and any lymph nodes and nearby organs that contain cancer. This surgery may be done when the bladder cancer invades the muscle wall, or when superficial cancer involves a large part of the bladder. In men, the nearby organs that are removed are the prostate and the seminal vesicles. In women, the uterus, the ovaries, and part of the vagina are removed. Sometimes, when the cancer has spread outside the bladder and cannot be completely removed, surgery to remove only the bladder may be done to reduce urinary symptoms caused by the cancer. When the bladder must be removed, the surgeon creates another way for urine to leave the body.

Even if the doctor removes all the cancer that can be seen at the time of the surgery, some patients may be given chemotherapy after surgery to kill any cancer cells that are left. Treatment given after surgery, to lower the risk that the cancer will come back, is called adjuvant therapy.

Photodynamic therapy (PDT) is a cancer treatment that uses a drug and a certain type of laser light to kill cancer cells. A drug that is not active until it is exposed to light is injected into a vein. The drug collects more in cancer cells than in normal cells. Fiberoptic tubes are then used to carry the laser light to the cancer cells, where the drug becomes active and kills the cells. Photodynamic therapy causes little damage to healthy tissue.

Follow-up tests may be needed.

Some of the tests that were done to diagnose the cancer or to find out the stage of the cancer may be repeated. Some tests will be repeated in order to see how well the treatment is working. Decisions about whether to continue, change, or stop treatment may be based on the results of these tests. This is sometimes called re-staging.

Some of the tests will continue to be done from time to time after treatment has ended. The results of these tests can show if your condition has changed or if the cancer has recurred (come back). These tests are sometimes called follow-up tests or check-ups.

Treatment of stage I bladder cancer may include the following:

Treatment of stage II bladder cancer may include the following:

Treatment of stage III bladder cancer may include the following:

Treatment of stage IV bladder cancer may include the following:

Treatment of recurrent bladder cancer depends on previous treatment and where the cancer has recurred.

Treatment for recurrent bladder cancer may include the following: